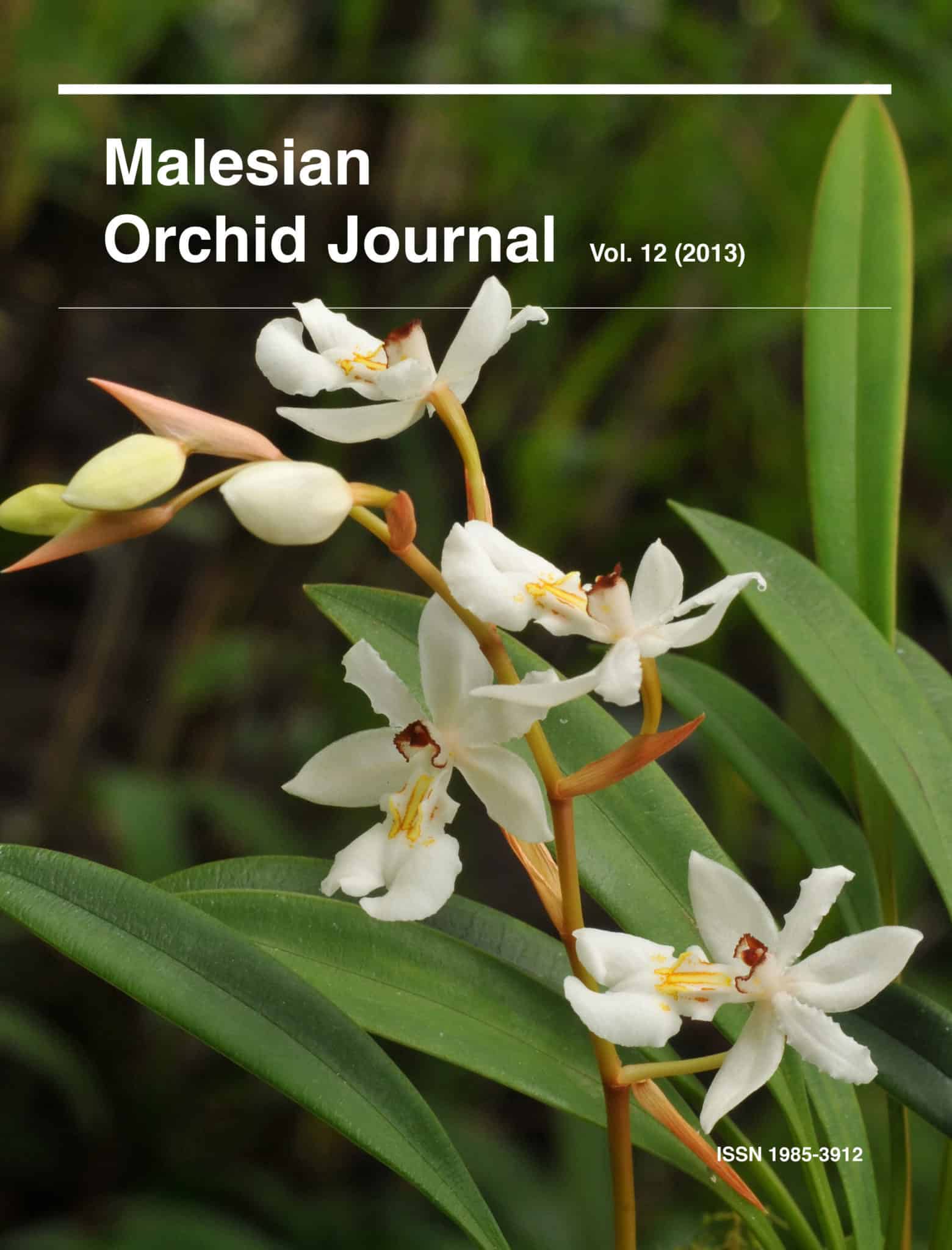 It is hoped that this publication may help in some small way to highlight the amazingly diverse flora of Malesia, of which the orchid family is a significant and unique part. Some have referred to the orchids as the ‘pandas of the plant world’ and as such they have become a valuable flagship group in the development of conservation strategies. Authoritative publications collating the flora and fauna of biodiversity hotspots containing high endemism are invaluable tools in highlighting the need for in situ conservation.

Orchids new to science still continue to be discovered and described on a regular basis from every corner of the globe, even from areas that were thought to be well botanised. This is particularly true in the humid tropics of both the Old and New World.

Contributions on various aspects of Malesian orchids are welcome, as well as up-to-date news about research projects, including forthcoming monographs, revisions and checklists, and important conservation issues within the region. Lively debate is encouraged—not all contributors will have similar views over matters such as generic delimitation. It is hoped to include book reviews in future issues.

Peninsular Malaysia is home to 949 orchid species and as I am writing this the number may well have risen to 950. There are some excellent books that will help to identify most of the species fairly readily, in particular Holttum (1964) and Seidenfaden & Wood (1992). A highly attractive recent book by Ong et al. (2011) is also warmly recommended, although this is not complete in its coverage. Much of the published information is based on a surprisingly small number of herbarium specimens. Many species have been recorded only a few times, sometimes only once. Our knowledge of the distribution of numerous taxa is sketchy and the taxonomy of several species is still unclear. To remedy this situation a complete regional revision of the Orchidaceae for the Flora of Peninsular Malaysia is envisaged, coordinated by the Forest Research Institute Malaysia. Unfortunately, there is at present a distinct mismatch between the amount of work involved and the amount of time sufficiently trained botanists are able to invest in it. At the present rate of progress it will take many years until a volume on orchids for the Flora will be completed. In the meantime, it has been agreed that the Malesian Orchid Journal will be a repository for contributions towards such a complete, updated orchid flora of Peninsular Malaysia.

In the present issue, two Flora treatments, for the small subfamilies Apostasioideae and Cypripedioideae, demonstrate how much our knowledge has advanced beyond what is found in the books just mentioned. Peter O’Byrne’s painstaking revision of the genus Dipodium in Peninsular Malaysia is another contribution towards a revised orchid flora for this country. Dipodium is a distinctive but taxonomically surprisingly difficult genus, in which misidentifications, misunderstandings and general confusion reign, as shown by O’Byrne. This article highlights the need for careful monographic work and solves many of the age-old problems attached to this genus. For example, O’Byrne discovered that the name Dipodium pictum has almost consistently been misapplied.

Lim and co-authors contribute a paper on the conservation status of 86 orchid species from Peninsular Malaysia. It is depressing to learn that orchid collecting, or rather orchid plundering, from the wild is an increasingly serious threat to the survival of many orchid species here. There is probably no single solution to this problem; better legislation, better law enforcement, and better protection are urgently needed. But what is needed above all is a change in mentality. Collecting orchids from the wild, except under special circumstances (scientific research, salvaging from destroyed habitats, carefully controlled introductions to cultivation), should be seen for what it is: stealing.

As usual, there are several articles describing new species. In this issue the reader will find a pretty new species of Chelonistele, named after Queen Máxima of The Netherlands. The species is certainly beautiful enough to deserve such an accolade. At present it is not known where it occurs in the wild, but one can speculate that it originates somewhere in Borneo, where almost all Chelonistele species are endemic. Other novelties are Dendrochilum schaiblei, Trichoglottis alba, Dimorphorchis seramensis and Dendrobium azureum. The last mentioned, one of the very few blue-flowered epiphytic orchids, was collected by entomologist Evelyn Cheesman just before the Second World War on Waigeo Island. In those days this island off the western tip of New Guinea was even more remote than it is today. Camping there for months in the tropical rainforest, with almost daily downpours, as Ms Cheesman did, is evidence of a singular dedication. As she was travelling alone, albeit always with local helpers, she must have been an intrepid lady indeed. She did not collect many plant specimens, but at least her hardships were rewarded by the discovery of what must be a striking, in her words ‘brilliant blue’, orchid species. I would love to see an actual living specimen of it, rather than a desiccated, largely brown one.

Another passionate collector, but mainly of orchids rather than insects, was Cedric Errol Carr, who tragically died of malaria whilst collecting plants in eastern New Guinea in 1936. As in the case of Ms Cheesman, his main sponsor was the British Museum of Natural History, which owns the ‘first set’ of his New Guinea collections. At the instigation of Ruth Kiew (one of the editors of the Flora of Peninsular Malaysia mentioned above) we publish some reminiscences of Carr by the botanist and mycologist E.J.H. Corner (1906–1996), who worked in Singapore Botanic Gardens between 1926 and 1946, during which period he became acquainted with Carr.

Singapore once boasted about 226 native orchid species. Those who have visited this tropical city state will hardly be surprised to learn that about 178 of these are now extinct. They have perished with the forests that once covered this southern tip of the Malay Peninsula. Most of these species will never return, but from time to time species believed to have been lost are rediscovered. Paul K.F. Leong and Yam Tim Wing report on the rediscovery of the inconspicuous terrestrial orchid Hetaeria obliqua in one of the forest remnants of Singapore.

Antony van der Ent and Jeffrey Wood describe the remarkable orchid flora on ultramafic soils in Kinabalu Park in Sabah. Such soils are poor in nutrients and rich in toxic metals. As a result, the vegetation is open, often with stunted tree growth. Many orchid species appear to profit from the lack of competition and higher light levels. The famous Paphiopedilum rothschildianum, which only occurs in Kinabalu Park, is found under these conditions, among many other orchid species, as beautifully illustrated in this paper.

It is again my pleasure to thank the authors, photographers, illustrators and reviewers for their support.